I consider Eternal Growth Partners to be an ethical fund manager. Just not in the way ethical investing is usually presented. I will explain.

Like all ethical managers, your investments, however will be based on my ethics. There are around 200 posts on the blog now; a reading of these would give a reasonable sense of my views on a variety of subject matters, but for simplicity, I will lay out my views on the big issues most ethical funds are built on:

1.      Fossil Fuels are the primary issue on which most ‘ethical’ funds are built. EGP own no companies involved in extracting fossil fuels. We own a couple of mining services companies, one of these has a business that provides services to miners who deal in fossil fuels (coal).

As to my personal views on fossil fuels, like everything in my life, I strive to minimise waste, and I think you should too. I drive a late-model, small-engine, fuel-efficient car as rarely as practicable (unlike some ‘environmentalists’ I know who drive gas guzzling sedans from last century, when for the same money a late model small-engined vehicle would serve their needs and better serve the environment) and catch public transport wherever possible. I wear my clothes until they’re properly ‘worn out’, not just out of fashion. My family lives in a small house (by choice, I could afford something much larger) with only 1.4 rooms per resident (unlike some who will talk with horror of our consuming way of life and then live in grossly oversized properties). 1.4 rooms per resident is fully one room less per resident than the Australian average and if you take the fact that I run a business there, the ‘employee’ effectively adds another user to the property and brings the rooms per resident/user below half the national average. So you can see I think the choices you make better reflect your commitment than the rhetoric you spout.

That said, I am extremely hopeful that time and technological advancement will eventually abate the quantum of fossil fuel consumption, but as a realist, I expect that this change will happen towards the end of my life and be driven more by price effectiveness (when unsubsidised renewables and storage are cheaper or somehow more convenient than fossil fuels) than by environmental matters – as Ben Franklin said “If you would persuade, you must appeal to interest rather than intellect”.

I have come only lately to this view having once been a fairly ardent and vocal environmentalist about 20 years ago as a teenager and into my early 20’s I bought strongly into what was then called ‘Global Warming’ (now climate change). Based on the evidence of the day and the predictions of the most eminent climate scientists, the Arctic was supposed to be navigable in summer and some of the lower lying Pacific Islands were supposed to have disappeared in the early part of the new century. I believed that eminent scientists had a very good understanding of these matters. Now, with a few more years of observing the evidence, I believe that the projections of climate scientists are scarcely more useful than those of stock-market pundits. The warming stopped in 1999, it has certainly rebased at a higher level than the preceding 30 years, but the extrapolation of the upward trend that scientists were making in the late 1990’s looks decisively broken and sea levels have actually declined in the last 10 years, against all predictions. Those of you who know me well know I do not like to be wrong and in fact go to an inordinate amount of trouble to ensure I hold defensible positions on any subject of contention. When it comes to the predictions of climate scientists, I have lately come to a position best summed up in the saying “Fool me once, shame on you. Fool me twice, shame on me…”

I believe as I always have, there is no possible way that human activity cannot be affecting and changing Earth. I always compare it to smoking; I didn’t need science to tell me smoking must be bad for you, it was self-evident. I am likewise sure that we should make every effort to keep our impact on the planet to a practical minimum, but like every field, people who make forecasts that turn out to be grossly incorrect must be held to account.

Given the more recently moderating views described above, I would buy fossil fuel extractive businesses if the economics were compelling enough. However as I have described several times in these pages, I do not like businesses where as the seller I have no control over the price of the product, so purchases should be exceedingly rare. Interestingly, I am strongly of the view that the current move away from fossil fuel investing by some institutions Globally will inevitably lead to better investment opportunities in these areas, supply and demand dictate this fact, people won’t stop using fossil fuels because their university or sovereign wealth fund doesn’t invest in them, but the returns fossil fuel extractive businesses generate will certainly be better for the fewer investors competing to put in the capital.

2.      Gambling. We own no stocks with exposure to gambling, however, I am of the view that gambling, despite the occasionally awful stories that stem from it is a choice we should be free to make in a properly free society. If gambling stocks such as Crown or Woolworths were available at attractive prices, I would buy and you as my client would have to live with this choice.

3.      Alcohol & Tobacco. Both insidious drugs that I don’t much care for personally, but like gambling, ones I feel individuals must be able to choose for themselves. I would also support full decriminalisation of every other drug (subject to the same sorts of restrictions that apply to alcohol – such as not operating vehicles under the influence etc), you’re probably starting to see a trend about personal responsibility here…

4.      Weapons/Armaments. We are focused on Australian equities and the opportunities in this field are extremely limited, but of the six ethical investment areas set out here, this is the one I would be most likely to avoid.

5.      Abortion/Contraception. Referring to points 2 & 3 above, you can probably guess my views here. It’s all about personal responsibility and in my view, one of the most basic human rights is to be born to a parent/s who loves and desperately wants you. Someone who does not want to get pregnant, or who finds themselves pregnant and is not yet desperate to have children should not.

6.      Farming. Certain types of farming are considered unethical. For a lot of environmentalists, consumption of any meat is unethical. Beef consumption is especially unethical as the amount of farmland required to raise cattle is high and their conversion rate (of feed into protein) is low. I would generally tend to avoid most agricultural stock as the history of Australian listed agricultural stocks is awful. However, believe it or not, you own a chicken farmer with your interest in EGP, if you want to be a vegetarian, that’s fine by me, but the fact is people will always desire animal protein. I consider the fact that chickens convert feed into protein roughly 5x more efficiently than cattle makes raising them (or at least providing the capital for a firm that does) ethical in my view.

So the six points above are the primary basis for most ethical investing, there are other matters such as pornography and slavery, but the industries are not exactly well represented on the Australian exchanges…

Under-considered by ethical managers and what I believe the primary ethical responsibility of a fund manager should be (before they consider any of the points listed above) is simply not to exploit their investors for financial gain.

In simple terms, the first responsibility of an ethical fund manager should be to establish a fee-structure that ensures their clients are true clients and not some ‘foil’ to be exploited for maximum revenue. I do not expect all fund managers to operate with no underlying management fee, the way the EGP does, but the underlying fee in my view should be enough to cover the running costs of the enterprise. The ‘profit’ of the enterprise should come from how well they perform for their investors over some predetermined hurdle level. The second ethical point addressed in any investment enterprise is alignment. I have virtually all of my family’s investable assets wrapped up in EGP, but I know of plenty of fund managers who hug an index with their clients’ funds, but do something completely different with their own money.

This post was prompted by the recent launch of Future Super, an ‘ethical’ superannuation provider that will avoid fossil fuels in its investment allocation. A picture of their fee offering is below. If you’re a smart investor, their 1.9% per annum fee will be at the bottom of any list of places you’d consider putting your funds. I’d wait for an ETF that matches one of the newly formed fossil fuel exclusion indexes (.pdf) at low cost, or if performance matters more to you, place your funds with EGP – Tony Hansen 17/10/2014 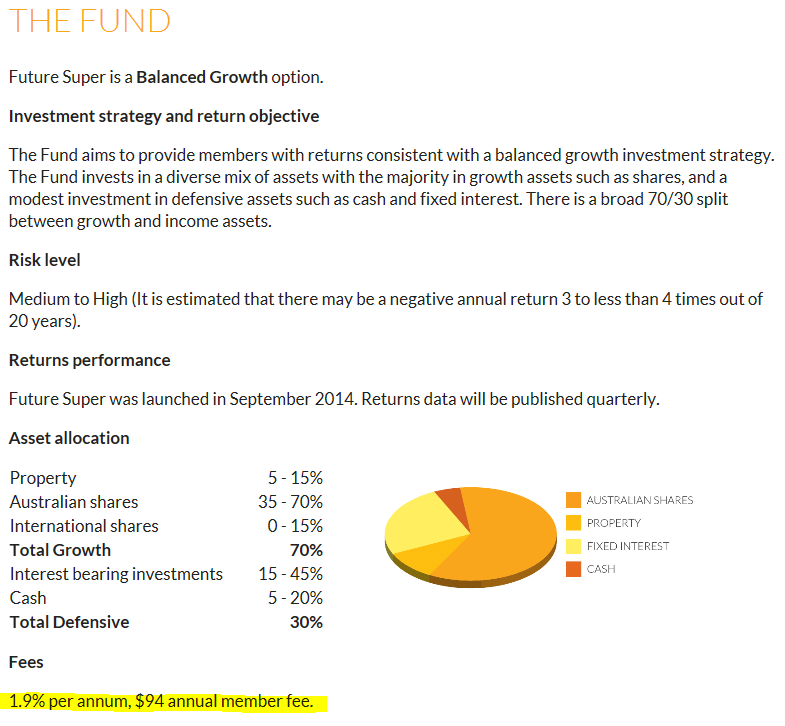