The returns for Australia’s top 15 equities fund managers are out for the period to 30 April 2012.  The median performance was a 4.7% loss.  The benchmark over the period showed a 3.6% loss, the 1.1% difference is what investors were paying to achieve the result.  The table is posted here: 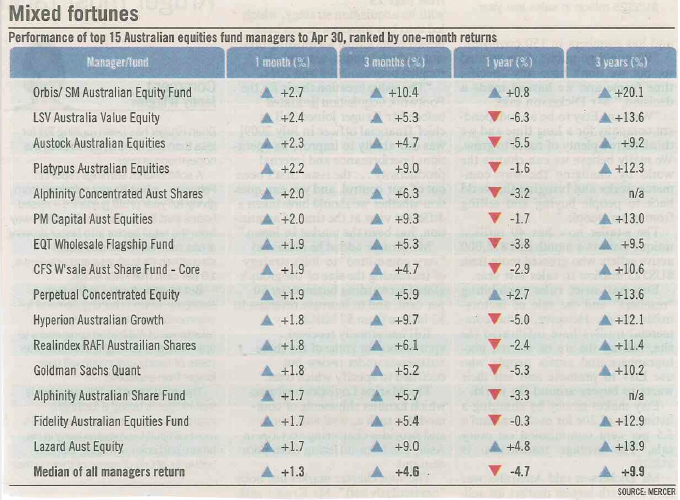 Over the equivalent period, EGP Fund No. 1 Pty Ltd returned 4.36%, which would have ranked us second on that list.  I look forward to making a comparison to these tables when there is a 3-year EGP record to track; I think the result will be similarly favourable, time will tell.  Over 3-years the index returned 10.4% and the median of these 15 large funds was 9.9%.  Tragically, this 0.5% underpeformance is an historically excellent result, which over most similar periods would be much wider.

I was tweaked to post about the performance of fund managers when I saw the back page of the Australian Financial Review on Tuesday.  Under the headline ‘Testing times for stock pickers’, the chanticleer article mentioned the fund manager BlackRock has given up on fundamental ‘active equities funds management’ in Australia.  The reason alluded to is the underperformance over 3 and 5 year periods, when I have posted previously on poor managed fund returns, I have referred to ‘elimination bias’ that exists when compiling performance comparisons.  The exit of such a massive organisation (the article stated US$3.7 trillion in FUM globally) clearly denotes this bias should be on our radar when making comparisons.  The BlackRock funds being wound up were ranked 84th of 100 ranked by Mercer, you can bet a good number of those 16 funds behind BlackRock will be closed or ‘wrapped’ into a more successful fund at some point.  Despite this ‘elimination bias’, after stripping fees, close to 80% of equities funds that achieve a 5-year performance record will fail to beat a suitable benchmark.  The funds management industry as a whole has much to answer for, especially in Australia where SMSF’s account for nearly $500 billion, and are presumably chiefly managed by ‘muppets’ as the large investment banks would describe this ‘unsophisticated’ Mum & Dad group they can’t seem to best…

Finally, reading Scott Sumner through the week, I thought his assessment here was brilliant, I have been saying similar things for some time:

5.  And now we have Greece.  This tiny country is 2% of the EU.  If (God forbid) it was destroyed by an asteroid tomorrow, stock markets would soar upward all over the world.  The Greek crisis would be over.  Yes, banks would hold some worthless Greek debt; but with no further moral hazard concerns, the rest of the eurozone would gladly bail out their banks, and add that Greek debt to their own public debts.  Remember, Greece is 2% of the EU.

That outcome is absolutely indisputable in my view, it obviously doesn’t change the fact that there are larger economies with similar issues, but it (the Greek economy & political process) doesn’t deserve anywhere near the attention that it is afforded by the international press & markets.  I will touch on the Euro again next week – Tony Hansen 25/05/12.