Reporting season is basically done & dusted.There were not too many massive surprises for me – the companies I follow closely (there are about 50 I maintain an intimate familiarity with) were as a group probably reporting a slightly better result than I expected, but not meaningfully better.  As usual, the best of the companies have conservatively stated accounts and earnings that could potentially have been made to ‘appear’ better with more aggressive presentation.  Despite a handful of notable exceptions, corporate Australia also seems to have very solid balance sheets, benefiting from lessons learned in the GFC.  Should credit markets freeze up for one reason or another, there will be nowhere near the number of equity raisings there were in 2008 & 2009.

What I was interested to note was a significant improvement in the ‘outlook statements’ there was a definite improvement in sentiment (with the notable exception of companies servicing miners & miners themselves), tinged as is prudent with caveats and caution.

I was directed to some interesting material regarding financial literacy on Felix Salmon’s blog last week.  The most interesting academic article (pdf) in it that I thought I might share with readers looked at the correlation between intelligence and household wealth; the outcomes relating to numeracy are particularly interesting in my estimation.  It’s a lengthy paper (38 pages) though about half of that is graphs and tables, which are truly fascinating (to me at least).  It certainly points to some ideas that bear thinking about.

For starters, I found it interesting that the most numerate person is primarily responsible for running the household finances in only about two thirds (67.6%) of households.  What are you thinking if the less numerate partner is primarily responsible for running the money??? It could be due to the least numerate individual being the primary income earner, and feeling they have the ‘right’ to manage the funds, but Adam Smith taught us the benefits of specialisation 236 years ago, it seems still we haven’t mastered it…

The second biggest takeaway was the disparity between household wealth in the sample set.  The couples who both scored in the highest numeracy category were over 8 times wealthier than the couples who both scored in the lowest category ($202.3k vs. $1,679.4k).  Further, in couples where the financial respondent was highly numerate & the non financial respondent was innumerate, they were still nearly 5x better off.  It pays to make sure at least 1 member in any partnership understands the numbers!

From another study (pdf) it should also be noted that “Stock market participation is monotonically related to IQ, controlling for wealth, income, age, and other demographic and occupational information”, the following table shows how powerful the correlation is: 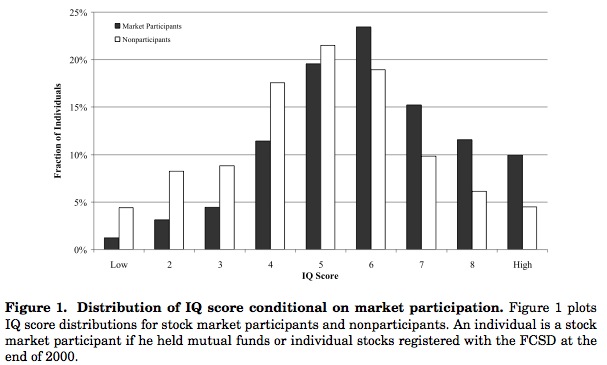 If you are a participant in the stock market, it is empirically likely that you have a higher than average IQ, though I don’t believe that means you are any more likely to ‘beat the market’, that likelihood in my (anecdotal & unscientific) view is likely infinitely more correlated with your temperament than IQ.  Truth be told, based on historical returns, over any long period, even underperforming the market in shares will likely lead to a superior outcome than most common alternatives, I will post some information next week which support this assertion.

Posting could tail off a little over the coming weeks as I re-compute my intrinsic valuations based on the June 30 numbers & make some capital allocation decisions regarding the significant cash inflow we will receive in early November from a corporate action I have mentioned previously & will touch on in full once closed – Tony Hansen 14/09/12.

*estimate, figure not yet available at my usual source – www.standardandpoors.com/indices/sp-asx-200/en/us/?indexId=spausta200audff–p-au—-