As mentioned in the Monthly Newsletter February 2018 was the worst month in the short life of the EGP Concentrated Value Fund. It was also the worst month since June 2013 for the history of both funds we’ve operated. As I mentioned in the newsletter, for the most part, although disappointed to have to report short-term quotational losses, we are pleased at the opportunity to add to a number of the investments that have caused the poor month.

We consider these purchases as likely to provide excellent performance in coming years, once the short-termism of the market passes and the intrinsic value of the businesses are properly reflected in market values. We have also encountered a couple of opportunities into which we are likely to deploy meaningful capital in the next month or two, with excellent economics and attractive risk adjusted returns.

Before I get to the main content of this blog, I also wanted to provide this link to a must read article from Small Capitalisation Fund Management legend (and EGPCVF unitholder) Peter Guy. The article is very long, but excellent read.

It has been my intention since very early in the month to reveal Shriro (SHM.ASX) as a top-10 holding this month and give a brief on the investment thesis for that investment. We will discuss the basics of the SHM investment thesis below.

SHM is a distribution business. Those that have followed EGP for some years will be aware that we have done very well out of another distributor Dicker Data (DDR.ASX). Distributors are generally fairly low quality businesses that scrape meagre margins from very high revenues. But when run well, they can be lucrative investments. Generally, a good distributor can add new lines or expand its existing range and with minimal additional investment, pushing the additional products through an existing logistical infrastructure, enabling margin improvement.

By way of background, SHM listed in June 2015 at $1.00 per share. They forecast 10.5c earnings per share in calendar 2015. The stock was savaged in August 2015 down to below 80cps as they delivered only 3.3cps of underlying earnings and the market somehow missed the fact that SHM is a considerably seasonal business with the bulk of earnings delivered in the second half of the calendar year.

Eventually, in 2015 underlying EPS of 11.1cps (after removing IPO costs) was delivered, comfortably beating IPO forecasts. The share price recovered to around the IPO price of $1. Then management announced their intention to sell some of their shares. Share price was soon plumbing lows of 66c. There were a number of issues in the first 12 months from listing that were largely due to the relative inexperience of a management that had operated as a private company for about 30 years but had not operated a business in the publicly traded marketplace.

After tax earnings over the past 4 years tracked as follows:

History has been one of remarkably consistent delivery. Now that the business is better understood as a listed investment, we expect the wild swings that have characterised the early share price of SHM will probably more closely resemble the normal gyrations of a listed company of this size.

Based on the calendar 2017 results, at around $1.45 per share and given the company has very little in net cash (or debt), the EV/E is around a multiple of less than 10 times. The trailing dividend is 11cps fully franked, which has a yield of over 7.5% or a very handsome grossed-up yield of almost 11% (based on EGP’s cost basis of $1.153 per share, the equivalent yields are over 9.5% and 13.6% respectively).

All of the figures in the preceding paragraph are trailing numbers. As most readers would understand, the market is generally forward-looking when taking its valuation cues. To that end, we need to think about revenues and earnings in coming years.

Revenues over the past 4 years have tracked as follows:

So the earnings growth has been delivered from fairly anaemic revenue growth. The ‘cost control’ and ‘productivity’ wells can only be visited so many times before they run dry. If SHM is to be valued meaningfully above current prices, the market will need to be convinced that in coming years the business is capable of revenue and EPS growth.

SHM’s stable of distributed products includes ‘Kitchen Appliances’, with the Omega, Blanco and Robinhood range. These products are at best “mid-tier” products and have had an excellent tailwind as they are right in the pricing/quality sweet spot for the massive apartment boom that’s been underway on the eastern seaboard of Australia. The wholesale of products into this market generates good margins because the need for showrooms and other costly elements of selling are largely avoided.

With that said, there’s a substantial retail component to this range that may well increase in the event that renovations replace new-builds, although this business would not have the same margins.

The other side of the business is the ‘consumer products’ range, with Casio and Pioneer the primary brands distributed (check full range here if you want to support one of your investments). The uncontracted relationship with Casio causes some concern for investors, but the relationship goes back over 30 years and the ‘watches & calculators’ are an ever decreasing proportion of the overall distribution volumes. This sector has been a little weak in the past couple of results and management have indicated there is new ranging in these products through 2018 that will hopefully increase revenues and profitability.

The foregoing would make for a business that should be able to maintain the revenues and profitability at around current levels, but is unlikely to have really bright prospects for growing earnings in coming years.

The potential growth engine for the company comes in the form of the company developed “Everdure by Heston Blumenthal” range of barbecues: 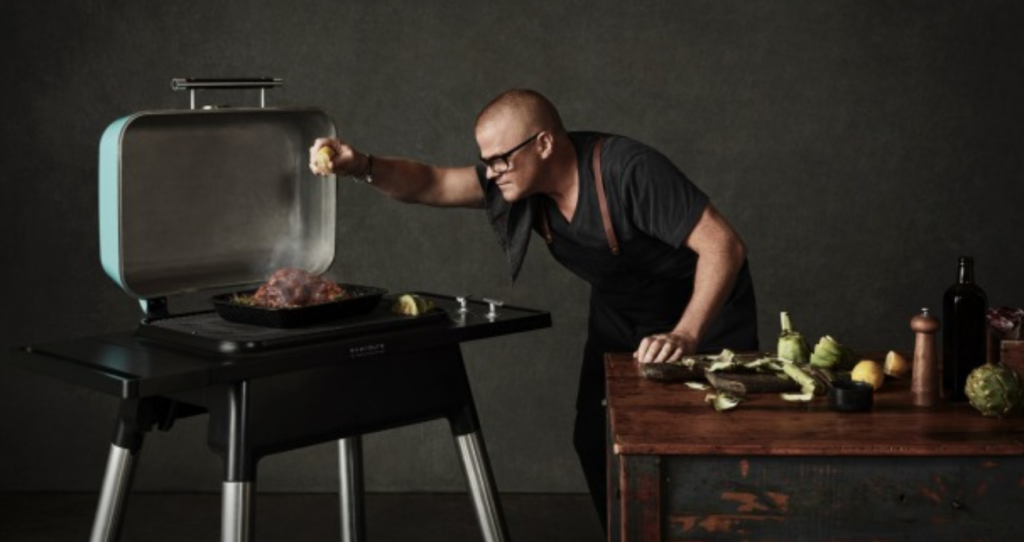 The barbecue range could be a company maker for SHM if successful as they are an owner of the intellectual property (IP) and it is a much more ‘capital light’ business as they will never touch the product (it ships direct from the manufacturer to the distributor).

The barbecues have already launched in Australia and are apparently selling very well (visit the website https://www.everdurebyheston.com/ and buy one if it’s time to update your barbecue, I’d love to hear about your customer experience!). Despite Australians thinking of ourselves as the global ‘kings of BBQ’, in truth we are a tiny market on a global basis.

The US barbecue market represents around a $6 billion annually and the German market is another very large market perhaps a little less than half that. Including wider Europe, the combined opportunity represents in excess of a $10 billion annual market to target.

SHM management have indicated that over time they would like to capture at least 1% of these markets.

Between the US & European barbecue markets, if the Everdure range is successful, it would not be out of the question for the Everdure range to account for as much as $100m of revenue within perhaps 5 years, with better margins than the rest of the business and requiring less capital. SHM are dealing with first class distributors in Williams Sonoma in the US with a good reputation for successfully launching high-end brands into that market.

This is the type of investment that often becomes a large holding for EGP as we have good downside protection with the existing business trading at an undemanding multiple and a shot at a true growth business at a reasonable valuation.

There is some short-term risk in the execution as management have flagged at least $1m in costs supporting the launch of the barbecue range into the Northern Hemisphere summer through March/April (that will likely be expensed into the seasonally weaker half of profit). They are also cycling some one-off benefits in 2017 that will not be repeated as they made a very cost-effective warehouse move that generated one-off gains and considerably reduced 2017 lease costs.